In Germany, the potato is undoubtedly one of the most popular vegetables. Therefore you won’t find anywhere else in the world more potato dishes than here. We love our hard-boiled potatoes, mashed potatoes, baked potatoes, pan-fried potatoes and endless potato salad recipes.

German Potato Salads are well known in the whole world – and for a good reason. In this blog post, I would like to tell you a little bit more about this beloved side dish and its regional varieties. It completes German grill parties and dinners! You can find it in the company of grilled or boiled sausage as well as Schnitzel and even on the Christmas Eve.

Here in Germany, we make our potato salads from potatoes that have less amount of starch in them, because they likely keep their shape after being cooked. Those are called waxy potatoes. In terms of cooking – avoid cooking them for too long; otherwise, they become mushy. We want them to keep their shape after slicing. Also, for the potato salad, we use jacket potatoes, that we peel after cooking. This way we capture all the natural nutrition of a potato, and it is as easy as using a vegetable peeler (if you practise!:))

Traditionally in the South of Germany, we prepare our potato salads without mayo. The dressing is made from beef broth, oil, vinegar and mustard. I like adding my dressing to the potatoes that are still warm, so they can soak a bit of it. That gives them an extraordinary taste. In the South, there are two salads that you need to know about: Swabian and Bavarian Potato Salad.

Swabian potato salad is straightforward, as it contains only potatoes, onions and the dressing. The salad goes well with grilled pork (especially pork neck!), Bratwurst and Schnitzel. The salad is beautiful and moist so you can pair it with anything you like. The potato salads without mayo are very versatile because they can be served either warm or cold, although in the German restaurants usually serve it cold. Swabian Potato salad can be topped with fresh herbs, I love adding chives to it!

Bavarian potato salad is richer in ingredients than the Swabian potato salad. Bavarians like adding to it pickled cucumbers, as well as their beloved bacon. For extra freshness, some add chopped apple to it, but I don’t think that this is necessary. Just don’t be surprised if you order it, and there is an apple in there. The salad goes well with Schnitzel, sausage and any pork meat.

In Northern Germany, traditionally potato salads are prepared with mayo dressing and are richer in ingredients. The popular ingredients include pickled cucumbers, onions or radish, hard-boiled eggs, apples, but also sausage or herring.

I hope that this blog post gave an insight into the world of the German potato salads, and now you know what to expect when you go on your journey to Germany. If you don’t want to wait that long I would encourage you to make one yourself by using one of the following recipes from our cooking blog Cooking the World. To make things easier for you, we also prepared a video that shows you how to make all of them! 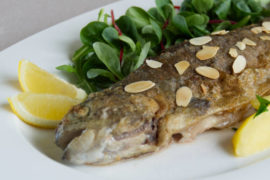